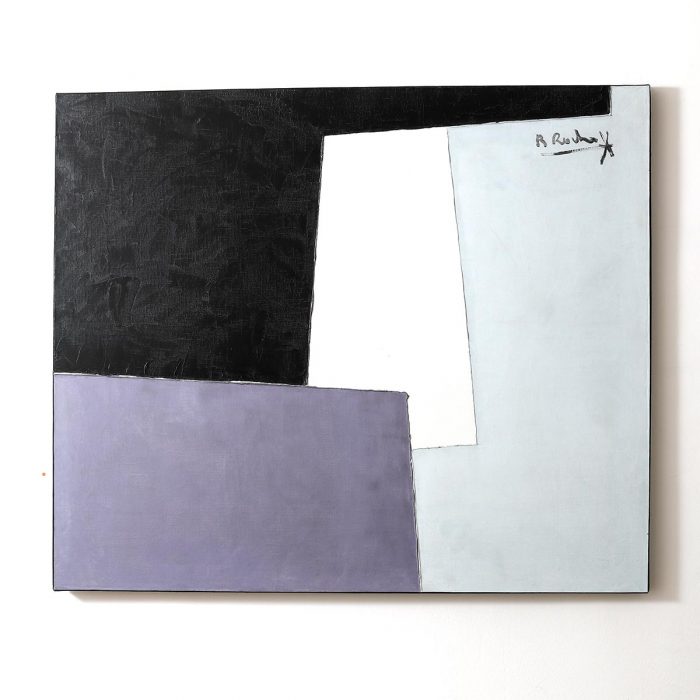 René Roche was born in Vienne, France, in 1932 to a working family. He followed an independent path and considered himself a self-taught artist and sculptor. In 1945 he began his mechanical training at the Lycée de Vienne, where he created his first graphic works. He became an apprentice to Pascal Valluit, where he worked and created his first paintings. In 1957 he built his first studio, and art dominated his life increasingly, despite having to work in the local industry to make a living.

He started exhibiting at the Salon des Artistes de Vienne in 1957, winning first prize at the 15th Salon in 1963, also having his first solo exhibition that year, organized by the artist at the Pascal Valluit. Throughout his career he exhibited regularly, both group and solo exhibitions, and accepted many commissions for murals and sculptures. He had a strong conviction that art was not only for museums and art galleries, but should be seen in public spaces and accessible by all. By 1970 he had abandoned figurative painting and devoted himself to geometric abstraction.

René Roche remained honest to his vision throughout his career and stayed true to his geometric works of art. Shape and color were his greatest inspiration and allowed him to realize the relationship between the two and express it through his own creations.

“One of my dreams is to throw color at the sky and make it stay there.” – René Roche

1992 – Participates in the exhibitions-symposiums « Plastics in contemporary art » in Oyonnax
Acquisition of the work exhibited by the cultural center of the city
Collective exhibition « Sculptors on a Plateau » in Lacoux (Ain)
Acquisition of the sculpture exhibited by the city
Acquisition of a sculpture by the Vachon establishments
1988 – Personal exhibition « Paintings-Sculptures » in the auditorium of the Part-Dieu
Acquisition of 3 paintings by the Saint-Pierre Contemporary Museum of Lyon
Order of a wall painted by the establishments Arman Béné
1987 – Order of a monumental sculpture by the town of Pont-Evêque (Isère)
1986 –  Participates in « Eight Artists and a building site » organized by the Vachon establishments at the Cour des Loges in LyonPurchase of a sculpture by the CNAC (exhibited Parc du Prado in Oullins, Rhônes)
1984 Participates in the « 4th Biennial of the arts of the street » in Villeurbanne
Collective exhibition « Les dossiers du FRAC Rhône-Alpes n° 1 » at the Center
1982 Participates in the « 3rd Biennale of street arts » in the Parc des Droits de l’Homme in Villeurbanne; The work exhibited remained on site
Order of a sculpture for Barby barracks in Challes-les-Eaux (Savoie)
d’Arts Plastiques in Villefranche-sur-Saône
1979 Personal exhibition « Espace et Abstraction » at the Palais Saint-Jean, Lyon
Collective exhibition at the Château de Vesvres (Nièvre)
Decoration of a church of Sables-d’Olonnes (Vendée)
1978 Participates in the symposium « Le Métal », at the Part-Dieu in Lyon
Produces a sculpture that will remain on site
Illustration by 7 of his collages of « L’Autre Rive »
1977 Creation of the Art and Environment Group; Publication of « Notes on Mural Art » and collective exhibition
Personal exhibition at the La Pyramide gallery in Vienna
1976 Participate to « Sculptors and rhodonpine workers » in Lacoux (Ain)
2nd exhibition at the Corinne Martin Gallery
Personal exhibition at the Reynaud Gallery in Vienna
Decoration of the spiritual center of Chaillé-les-Marais (Vendée)
1975 Development of the parish church of Andacette (Ardèche)
1974 First personal exhibition at the gallery Corinne Martin in Miribel (Ain)
1973 Expose at the Saint-Benoît Dome in Aubenas
1972 Improvement of the chapel of the Inter-College Saint-Denis in Annonay
First wall painted at the former seminary of Aines of Estresssin